Can You Record a Conversation on Your Cell Phone?

Everybody has a cell phone, and nearly everyone has a smartphone. Sometimes you talk to someone who lies all the time, and you’re tired of it. You get mad, you pull out your phone, and you record your next conversation with them. Because you don’t trust them. But can you record a conversation with your business partner without breaking the law? With your soon-to-be ex-husband?

Many people use their phones to record conversations with their adversaries, because they want to preserve evidence that might be relevant in court. Folks involved in a contentious divorce, or child-custody case, for example, might try to record a hostile confrontation that occurred during a pickup for visitation. Conversely, others might be worried that an adversary has secretly recorded one of their conversations and plans to use it against them out of context.

But do you have the legal right to tape these cell phone conversations even though it’s so easy to do? If not, what are the possible consequences? If you do record a conversation, can you use it as evidence in court? For a good primer on what you can and cannot tape, call one of the trusted attorneys at George Law at (248) 470-4300. 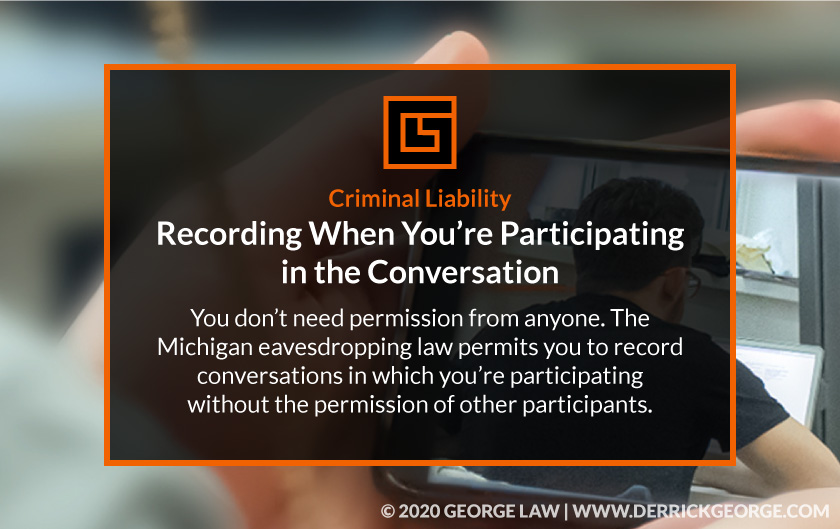 Criminal Liability: Can you go to jail just for recording someone’s conversation?

It depends on whether (i) you are participating in the conversation, or (ii) eavesdropping on a conversation between other people.

The Michigan eavesdropping law permits you to record conversations in which you’re participating without the permission of other participants. Other laws may apply, as discussed below. This makes sense given the law’s purposes. If you’re participating in the conversation, other participants are able to judge your character and determine if you are the kind of person who might reveal the contents of the conversation to others (either verbally or by making a recording).

It is a felony under Michigan’s Eavesdropping law, with up to 2 years in prison and a $2,000 fine, if you use any device to overhear or record a conversation without the consent of all participants. It is also a felony for you to “use or divulge” any information that you know was obtained through illegal eavesdropping.

The bottom line is that if you are not participating in a conversation and you use a device, such as your cellphone, to record the conversation without the permission of all participants, you could face criminal consequences. But if you’re participating, you can tape away.

Civil Liability: If someone records your private conversation, can you sue them?

The short answer: It still depends on whether (i) you are participating in the conversation, or (ii) eavesdropping on a conversation involving other people.

Before filing a civil-eavesdropping claim, consider what you really stand to gain by doing so. You can ask the judge to issue an injunction that prohibits the perpetrator from eavesdropping again. This could be a good remedy if you feel that the eavesdropper would continue eavesdropping on your conversations. Under the statute, you can also recover actual and punitive damages from the eavesdropper. Often you’re livid that someone invaded your privacy by taping your conversation, but your actual damages are minimal. And punitive damages are always questionable.  Your cost of litigating the matter may exceed any possible monetary recovery unless your actual damages are significant or the eavesdropper’s conduct was egregious enough to elicit a large punitive award from a jury.

Evidence and Admissibility: Can I use a recorded cell phone conversation in court?

Yes, subject to the rules of evidence.

But the exclusionary rule applies only to government conduct. It is specifically designed to keep the government’s potentially oppressive power under control to guarantee the protections of the Fourth Amendment. This is at the expense of excluding potentially probative evidence from court proceedings. The Fourth Amendment only restricts government conduct. So the exclusionary rule only applies to evidence obtained as a result of unconstitutional government action.

As a result, even if you break the law and unlawfully record someone else’s conversation, that recording is not automatically excluded from court.

Can I use any recorded conversation in court whenever I want?

No. To present any evidence in court, you must comply with the Rules of Evidence. In many cases, admitting conversations that you have recorded will be difficult. A big reason is the hearsay rule. It states that out-of-court statements cannot be used to prove the truth of the matter asserted. For example, you can’t use a recording of your co-worker saying “I cheated on my expense account” as evidence to prove that they were, in fact, cheating on their expense account.

At the same time, there are exceptions to the hearsay rule on which you may rely to convince a judge to admit as evidence into court the conversation that you recorded. For example, one exception is that admissions of a party-opponent are not hearsay. Thus, if a woman records her ex-husband’s cell phone conversation with his current wife, the hearsay rule will not prevent the woman from using the recording of her ex-husband against him in a child-custody case. The ex-husband is a “party-opponent” and his out-of-court statements are not considered hearsay.

Continuing this same example, note that the woman’s actions would violate the eavesdropping statute (assuming she didn’t have permission to make the recording). She was not a participant in the conversation. But violating the eavesdropping statute would not preclude the recording from being admitted as evidence in court. Of course, a prosecutor could press charges, and the woman could be subject to criminal liability. And if the ex-husband were so inclined, he could file a civil lawsuit against the woman and seek monetary damages.

Other Law: Is the eavesdropping statute the only law you need to worry about before recording all of your conversations?

No. Even if you comply with the eavesdropping statute, make sure that you are aware of:

The safest route is to always get permission from everyone involved before recording a conversation or sharing a recorded conversation with anyone. Or to call George Law at (248) 470-4300 and speak to one of their experienced attorneys.