What Happens if You Get an OWI With A Passenger Under 16 in Michigan?

In Michigan, the crime of Operating While Intoxicated (OWI) is taken very seriously. In fact, the State of Michigan is known to enforce some of the harshest DUI laws and penalties in the entire country. These penalties are enhanced when there’s a passenger involved who’s under the age of 16. Under certain circumstances, the offender can be charged with a felony and receive jail time, possibly even a prison sentence if prior convictions are involved. This becomes more likely when the offender does not have access to quality legal counsel.

The attorneys at George Law are experts in DUI defense and represent individuals charged with drunk driving and/or child endangerment. Our lawyers understand that every case is unique and may have factors that can result in a reduced sentence. We also understand that everyone makes mistakes and deserves to have their rights upheld as well as their side of the story heard.

Under Michigan law, driving under the influence of drugs or alcohol with a minor in the car is considered child endangerment. This is a more complicated charge than DUI/OWI.

According to Responsbility.org, 48 states and the District of Columbia have child endangerment DUI laws. In all, 42 states and DC have enhanced penalties for DUI convictions with a child passenger. It’s a felony to drive drunk with a child in your car in Alaska, Arizona, Indiana, Missouri, New York, Oklahoma, and Texas. Some states have different laws. For instance, Georgia’s child endangerment law only targets drivers with children under 14 in their vehicle but adds an additional DUI charge for each child in a car.
States have a raft of laws to protect kids in cars. They range from Michigan’s laws that make car seats mandatory for younger children to not leaving a child unattended in a vehicle.

Child endangerment carries higher penalties than other DUI offenses classified as OWI (0.08 to 0.16) and OWVI (impaired driving). Prosecutors bring the enhanced charge of super DUI/OWI when a driver has a blood alcohol content of 0.17 percent or more. A “super drunk” offense is serious and carries enhanced sanctions. However, there is a greater social stigma associated with child endangerment.

The penalties for OWI with a child under 16 in Michigan are at least five days and up to a year in jail for a first offense. You face a fine of up to $1,000 and driver’s license suspension for up to 180 days. The court may give you community service for 30 to 90 days. 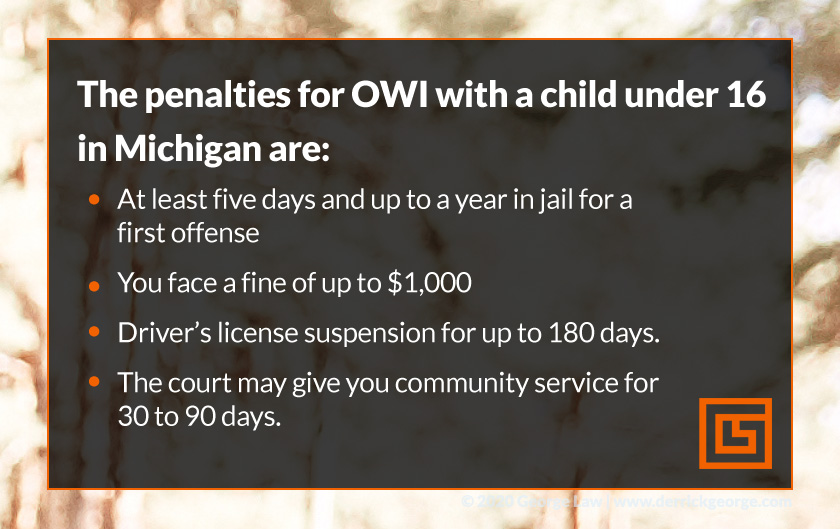 While a first child endangerment offense is a misdemeanor, a second within seven years becomes a felony. It carries a jail term of one to five years. Driving drunk with a child on board in Michigan carries a fine of $500 to $5,000 and community service of 60 to 180 days. The courts can order your car to be immobilized for one to three years if it’s not taken away.

The authorities may report a defendant to the Michigan Department of Child Protective Resources for an investigation after a child endangerment conviction. The courts may assign a caseworker to investigate child neglect.
A child endangerment conviction can have other unforeseen consequences. If you want to adopt a child in Michigan, child engagement can jeopardize your application with agencies and the courts. A judge in the family courts considers what’s in the child’s best interest. If the petitioning parent has a history of drunk driving and child engagement, this can be a major hurdle in adoption cases.

Statistically speaking, juvenile offenders are more prone to drunk and drugged driving. A first underage drinking and driving charge can carry a jail term if one or more children in the car are under the age of 16. The underage driver may be charged with child endangerment. This is a 93-day misdemeanor for a first offense. A second offense can land a young driver in jail for a year. Drivers under 21 can be convicted of OWI for driving with blood/alcohol content of at least 0.02 percent but less than 0.08 percent or with any trace of alcohol in their bloodstream. It’s important to act fast after a child endangerment charge. Hiring a lawyer from the outset will protect your rights and give you more time to defend yourself.

Attorney Derrick George of George Law has successfully defended many drivers charged with DUI related offenses in Detroit, Royal Oak, and many other areas throughout Michigan. If you’ve been arrested for child endangerment, it’s important to hire a lawyer with a long track record in DUI defense cases.