Can You be Arrested for DUI/OWI in a Parked Car in Michigan?

Drunk people often fall asleep in parked cars. They often don’t realize they can be arrested for DUI/OWI in a parked car in Michigan, but criminal attorneys in Detroit Michigan see it often.

In Michigan, the charge of operating while intoxicated goes beyond driving a car under the influence of alcohol or drugs. It includes having physical control of the vehicle.

Physical control cases are complicated. An experienced criminal attorney in Detroit can highlight the circumstances in your case that could help mitigate the charges against you.

How Can You Be Arrested for DUI/OWI in a Parked Car in Michigan?

Defendants are often confused about how they can be charged with operating while intoxicated when they are in a parked car or asleep. Some drivers are aware they are too drunk to drive. They wait in their car until their blood alcohol content drops. However, the law says If you are sitting in the driver’s seat of your car, you have the physical ability to operate and control the vehicle. A police officer may charge you even if the car is parked and the engine is off because you were technically OPERATING the vehicle.

Police can claim you drove the car before you pulled over to sleep. They may seek to use circumstantial evidence to bring an OWI charge in the absence of something more concrete like traffic camera footage. This is where a criminal attorney in Detroit is key to the success of your case. 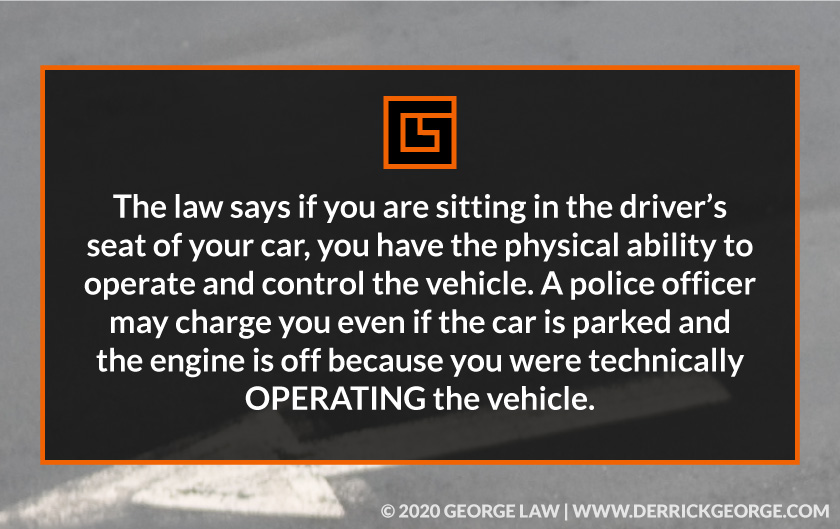 When is it Lawful for Police to Pull Over a Sleeping Driver for OWI?

Historically, Michigan did not recognize being drunk in a parked car as an offense. The 1995 case of People v. Wood changed the law.

The Supreme Court of Michigan considered a case in which a driver was unconscious in his van at a fast-food drive-through window in Howell. Wood slumped forward, his head resting on the steering wheel. Police found the van’s engine running. Its automatic transmission was in drive. The van was not moving because Wood put his foot on the brake pedal. He balanced a beer between his legs and smelled of alcohol.

Police found Wood to be confused. They arrested him and searched the car. They found a cooler containing marijuana, money, and a calculator.

Wood tried to suppress the evidence related to the drugs, as well as blood and field sobriety tests carried out by officers. The trial judge granted the motion ruling the arrest to be unlawful. Police did not see Wood committing the misdemeanor of operating a vehicle intoxicated, rendering his arrest unlawful, according to the judge.

The Supreme Court of Michigan ruled “operating” should be defined in terms of the danger the drunk driving law is meant to avert.

The justices said Wood placed the van in motion. It was a significant collision risk. The arrest was, therefore, lawful. Are Keys in the Ignition Important for DUI/OWI in a Parked Car in Michigan?

If police find keys in your car’s ignition they may say this points toward physical control of the vehicle. It’s not an exact standard. You may argue the ignition warmed the car or allowed you to listen to music. However, people who fall asleep drunk with the keys out of the ignition have a stronger case.

The position of the driver is also important in DUI/OWI in parked car cases in Michigan. A driver who is in the driver’s seat is in greater control of a car than a driver asleep on the rear passenger seat.

A judge and jury will consider the location of the car to gauge whether it poses a danger. A driver asleep in a parking lot away from the highway is more likely to beat an OWI charge than one asleep at the side of a busy road or in a drive-through or an intersection.

What Must be Proved to be Guilty of DUI/OWI in a Parked Car in Michigan?

The prosecution must show proof that the suspect operated the vehicle while impaired or drunk to sustain a conviction. Evidence like the key in the ignition and the engine running is important in making a case.

Alternatively, if the suspect has used a car, van or truck as a shelter and never moved the vehicle, this is a good defense to an OWI charge and George Law, criminal attorneys in Detroit Michigan, are adept at leveraging this defense.  You can argue you did not pose a risk to other drivers, pedestrians, or property. Police will often arrest drunk people who sleep in cars and charge them with OWI. They do not always respect the difference between controlling a car and using it as a shelter. A Michigan OWI defense lawyer can make these points to the court and ensure the prosecution abides by the law of Michigan. Please contact George Law for vigorous OWI defense at 248-470-4300.